I like to kick the morning off by visiting a handful of sites that collect cool app designs. One of my favorite is Capptivate. I often find myself browsing the site thinking “I want one of that.”. It’s even better if the design triggers another question in my mind: “How did they do that?!”.
I had one of these moments last week, looking at the push transition in Facebook’s Paper app. It was a good chance to take a stab at iOS7 custom transitions.

I won’t be covering in depth the custom transition APIs in this post, just what I needed to learn to reproduce the aforementioned effect. The main reason is because there are already good sources that cover this matter, I learned a lot from NSScreencast’s “iOS7 View controller Transitions” (the subscription fee is well worth all the quality content) and objc.io’s “View controller transitions”. The former covers modal transitions, while the later coverage of push transitions was really helpful.

Cool, we get notified when the navigation controller is ready to make its magic. Let’s take a look at what kind of object it expects from us, by inspecting UIViewControllerAnimatedTransitioning protocol:

Easy enough… one call for the animation’s duration and one call to perform said animation.
Before diving into the code we might want to lay out our animation graphically. Let’s fire up Sketch and draw something: 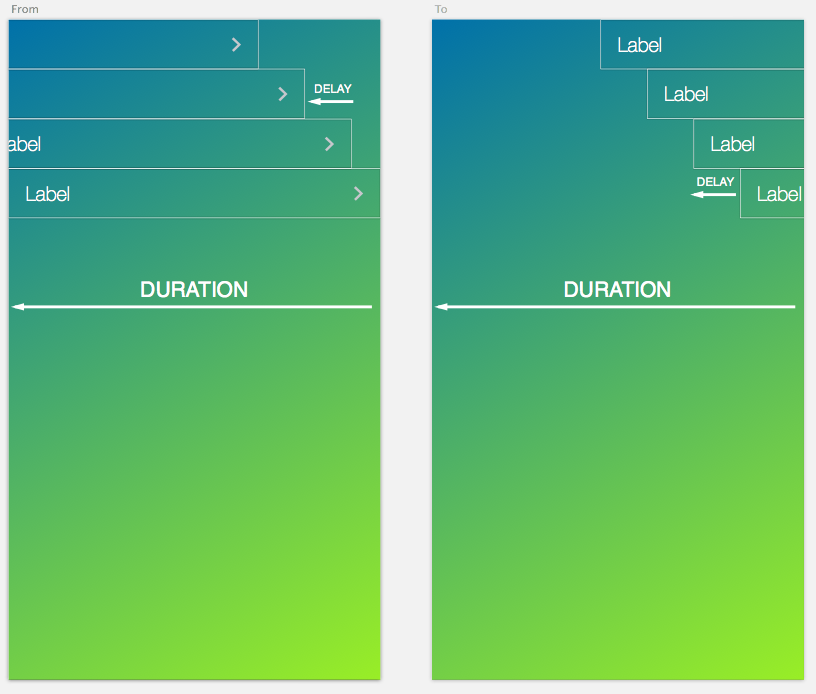 Ok, so we have two view controllers, they both have table views, and we want to present the new cells with a slight delay each, while kicking the old cells to the other side, with the same delay.
Let’s break it down.

To sum it up (I’ll include only the push code):

This will get the cell animating back and forth, but the effect is far from impressive, we need some further tinkering.

Setting up the view controller

If you take a look at Paper, the cells move back and forth on the same background image, you can’t see a clear cut from a view controller to the other. That’s easy to achieve, we just need to configure our navigation controller like this:

And our cells need to be transparent too:

Now we can take the new animator for a spin, by returning it in the delegate method:

It’s not perfect, but it can be easily tweaked.

I released all the code described above as a pod. It includes both the push and pop operations, and its fairly customizable.
You can find the source here.

« Previous: Hey iOS, I like you, we should be friends Next: UIKit Dynamics »